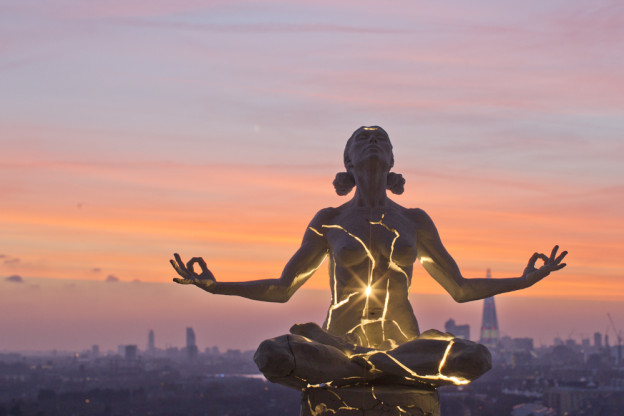 From the moment we are born, the world tends to have a container already built for us to fit inside: A social security number, a gender, a race, a profession or an I.Q. I ponder if we are more defined by the container we are in, rather than what we are inside. Would we recognize ourselves if we could expand beyond our bodies? Would we still be able to exist if we were authentically ‘un-contained’?

Nine months ago, in the midst of the pandemic lock-down in the US, I received an email from a reader that crushed my heart. Here’s part of that email and her story, shared with her permission.

“I feel like the most awful daughter and person that ever existed. My elderly mom is not well and I’ve become her sole caregiver doing everything from carrying her to the toilet, bathing, feeding and making sure she swallows her pills that she tries to spit back out at me every day. She was supposed to go to a home but because of COVID restrictions in our state, we’re stuck together until things open up. I’m on my last leg. In my rawest moments, I wish she were dead. I know that’s awful to think and I can’t believe I’m even sharing this with anyone but I have to tell someone because I’m dying inside.

My spirit is depleted, my body has no energy left and I feel like a hollow shell going through the motions of what a good daughter and person should do but there’s nothing left of me inside, not even goodness. Sometimes when I put her to bed, I have bad thoughts, like what would happen if I just put this pillow over her face. I would never do it of course but the thoughts are there nevertheless. Can you please help me before I’m too far gone, or maybe it’s already too late?”

Susan (not her real name) became my client and after 6 months of working privately together, I read her email back to her during a coaching call and this was her response:

“I can’t believe how far I’ve come. The person who wrote you that email no longer exists. It’s like she’s someone from a distant dream. Last night as I put mom in bed after the bathroom, like I do every night, I sat her forward and leaned her body against me while I propped some extra pillows up behind her so she could sit up for a bit and talk. I felt her warm, bony body against mine, her chin on my shoulder, her hair in my face and I could hear and feel her breathing.

And suddenly, in one absolutely ordinary yet miraculously clear moment, I felt nothing but utter love for her. It was like we were one person, melded together in time, just for a moment, as our bodies were one so were our souls. There was no separation between who she was and who I am. I don’t know how to explain it in words, it was surreal and yet deep down, I knew this was more real than what I see outwardly – that there are two bodies, two personalities, two different lives and two different people. That’s what it appears to be, but in that moment, I knew that wasn’t true. We were one. We ARE one.

I finally understand what you and others mean when you say we are all one. It used to be just a nice spiritual saying but now I live this. The immense love and joy that pours out from inside me energizes me and provides sustenance to keep me going day after day and I look forward to our “bedtime talks” together and can’t imagine what I’d do once she’s gone. I love her with everything in me. I honestly don’t know how I didn’t see this before, it’s like my whole relationship with her has been a shadow dream and I’ve just woken up to the truth of us and who I am.”

GROWING UP WITH A NARCISSISTIC PARENT

It’s important to note that Susan grew up with an abusive, narcissistic mother who barely cared for her and treated her like she was an annoyance.

When Susan was 10, she asked about her father, and her mother told her he left “because you were born.”

When Susan was 12, her mother tried to sell her to a male friend of a friend but when he refused, she blamed Susan, saying she was so ugly that no one would ever want her.

When Susan was 15, she ran away. Her mom never reported it nor asked around, it was as if an unwelcome dinner guest had simply left after dinner.

Susan found refuge in a friend’s older brother’s home. They quickly became lovers and he eventually turned out to be as mentally and emotionally abusive as her mom.

By the time Susan turned 40, she had 3 grown kids and was finalizing a divorce that was long overdue. With a renewed future ahead of her, she decided to reach out to her mom in an effort to release her past trauma, heal her maternal wounds and move forward with a clean energetic slate.

There was a long moment of silence, then, “I thought you were dead.”

Susan pushed through her tears on that call, despite her urges to hang up and never look back. They began a strained relationship which ultimately led to her becoming her mom’s caregiver 10 years after that fateful conversation.

To this day, Susan’s mom has never apologized or acknowledged the pain her daughter has experienced as a result of her upbringing. Instead, she claims to be a good mother and asserts that it was Susan who was the cause of all their problems.

So how is it that Susan has been able to find peace with her mom, let alone an outpouring of love and joy, without insomuch as an apology or acknowledgment?

When I first met Susan nine months ago, she was a Survivor, stage two in her Empathic Awakening Journey. She was barely hanging on, exhausted from taking care of her abusive mother in a COVID mandated isolation.

On our first Zoom, I noticed her pale skin, sunken cheeks and lifeless eyes. But I also felt a light inside her, hidden even from her, underneath the layers of outworn stories, conditioned thoughts and habitual abuse.

It was this light inside that nudged her to reach out for help.

It was this light inside that kept her going when she wanted to give up.

It was this light inside that yearned so desperately to shine that she dove headfirst into the work I gave her, and quickly rose through the stages, from Survivor to Observer in six months and then to Alchemist in nine.

As an Alchemist, Susan’s energy has completely changed. She used to wake up dreading the day, feeling heavy anxiety with the mere thought of having to go into her mother’s room to check on her. She would linger in bed under the covers for as long as she possibly could, as if she waited long enough, something miraculous would happen and her obligations would disappear. But nothing would happen and she’d drag her body out of bed as if her bones were made of molten lead.

Now, she wakes up with a lightness in her heart and an eager excitement for the day. She feels an ease and flow in her thoughts and actions, and while she still takes care of her mom, she considers it a sacred service rather than a heavy burden.

She’s neither a victim nor a martyr. And not once does she entertain the ego’s lure of identifying with martyrdom, a common inducement for sensitive caregivers which keeps them stuck in the first two stages, Identifier and Survivor.

If you ever find yourself thinking you sacrifice your life for someone else or you give and give and give and get nothing in return and people keep taking, you might want to consider that your ego has you spellbound in its martyr grip. Click here to read about being in stage 1, an Identifier, and learn how to break free from the ego’s hold.

While Susan’s external world hasn’t changed much, her internal world has completely opened up and she’s tapped into a profound sense of inner peace and radiant joy that will, before long, spill out into the external and shift everything for her.

Everything true occurs first in consciousness, in energy, and then it outpictures itself and forms what we call “reality,” that which we see, hear, touch, taste and smell. Had Susan been focused on changing her external reality, she might still be dragging herself out of bed everyday, nine months later. Instead, she recognized the importance of doing the inner work and we were able to focus on clearing out subconscious blocks, trapped emotions and old harmful beliefs.

THE RISE TO ALCHEMY

Susan’s relatively quick rise to Alchemist in the midst of her grueling circumstances is testament to the bright light inside her, the soul of who she is.

This is how Susan eloquently describes her shift:

“It was as if I had a sun living inside me, full of warmth, light and immense power, but there was a thick black heavy bag around it sealed tight. Everything in my life was dark. My mom too. Her sun had a black bag around it too. And neither of us knew about this sun inside us because it was hidden and covered up, and frankly, no one told us about it so how would we know?

So we lived in darkness, thinking it was the world that was dark and us that was dark and that was just our normal. But then one day, you told me about this mysterious light and somehow convinced me it was inside me, despite my doubts. And suddenly, it felt like the bag became loosened and I’d catch glimpses of its rays every once in a while, seeping out into my being and my life.

It wasn’t until I made the choice to remove the bag that I discovered I AM THE LIGHT. And my world will never be the same again. The darkness just disappeared, I didn’t even have to force it out, it just dissipated in the presence of the light. My mom’s bag is still around her sun, but that’s her choice and her path. I can look at her and see through the bag now and right into the light of who she really is. And it’s beautiful.”

In the same way that I told Susan, I’ll tell you too, dear reader. YOU are a force of light in this world. YOU have a beautiful, brilliant bright light inside you. My greatest desire is that you can catch even a glimpse of this light and see for yourself just how powerful you are. 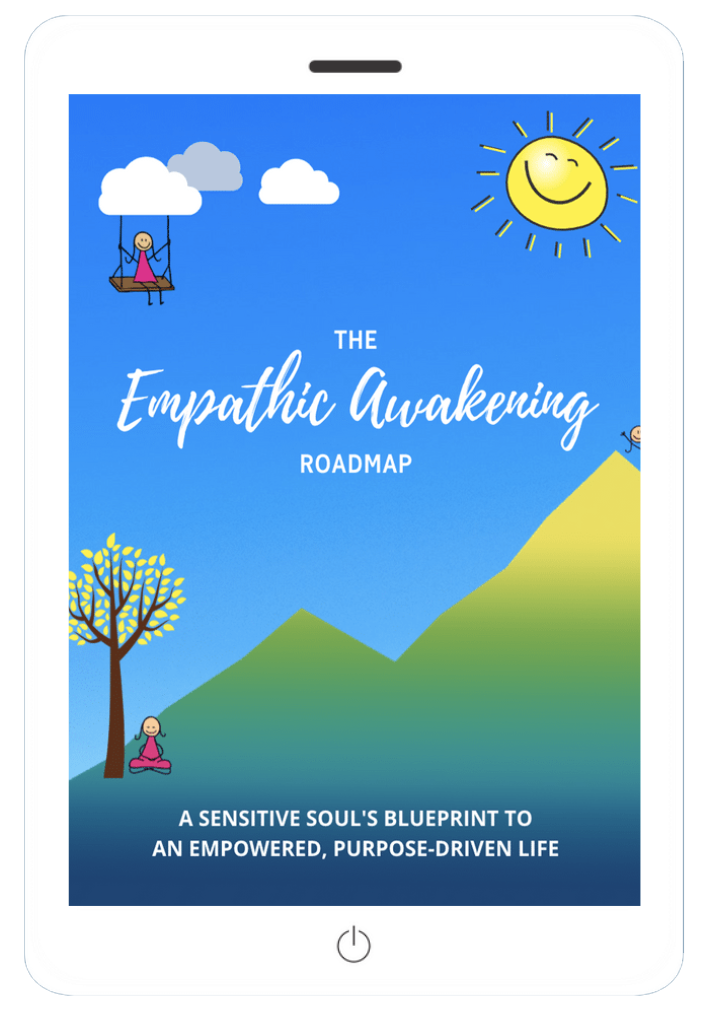